Wondering the difference between peridot and emerald?

You've come to the right place.

In this Learning Guide, I'll answer questions such as: 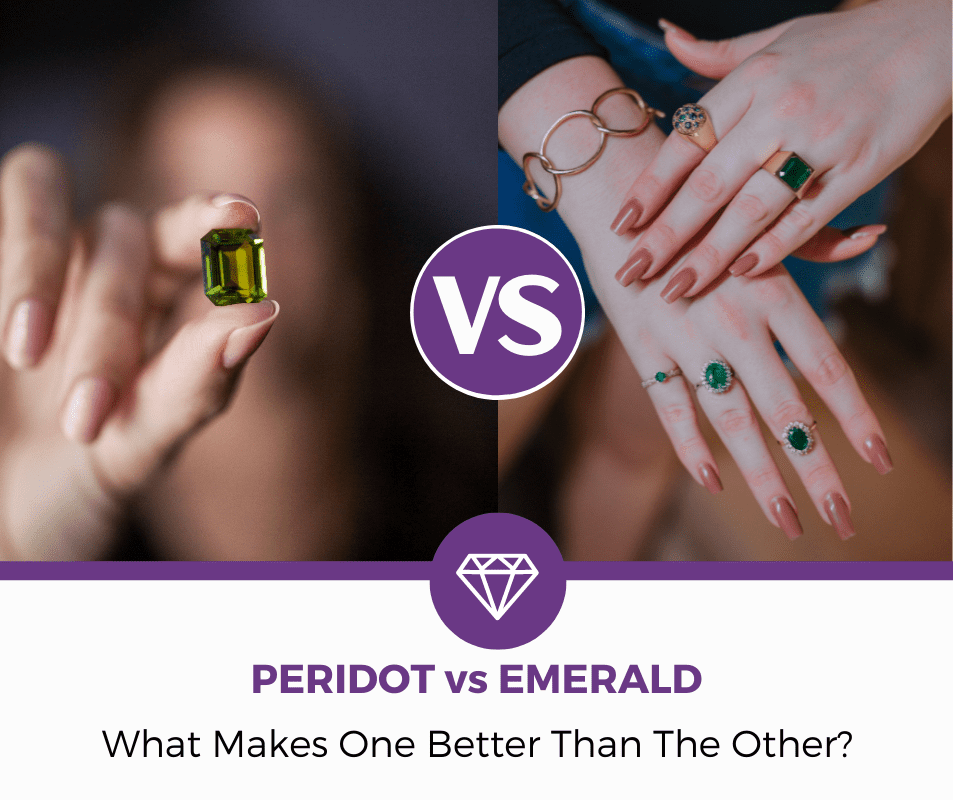 Main Differences between Peridot vs Emerald

Peridot stones are one of the oldest gemstones used since ancient times. It is a variety of the olivine mineral group. This mineral group is composed of magnesium and iron rich silicate minerals.

Peridot isn't considered an expensive or rare gemstone. To be honest, other than being the August birthstone, it doesn't get a whole lot of attention. With new age practices, some use this green stone for its healing properties and benefits. 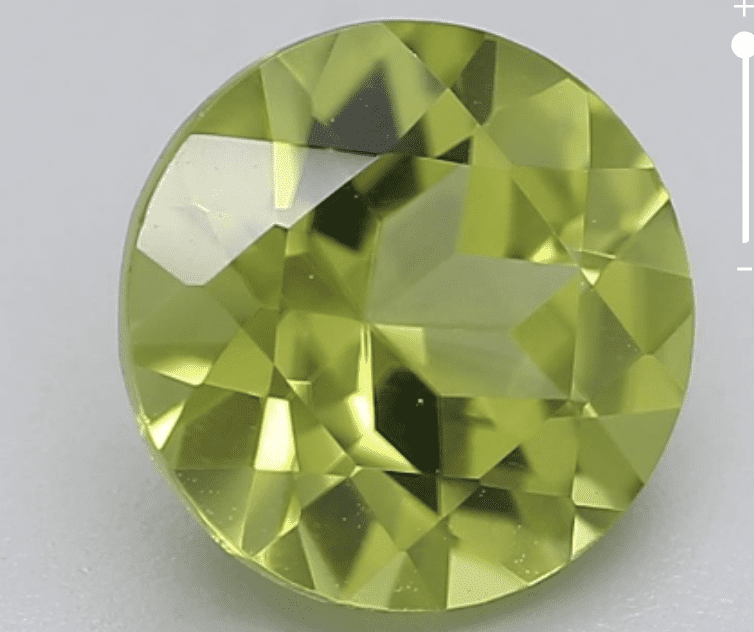 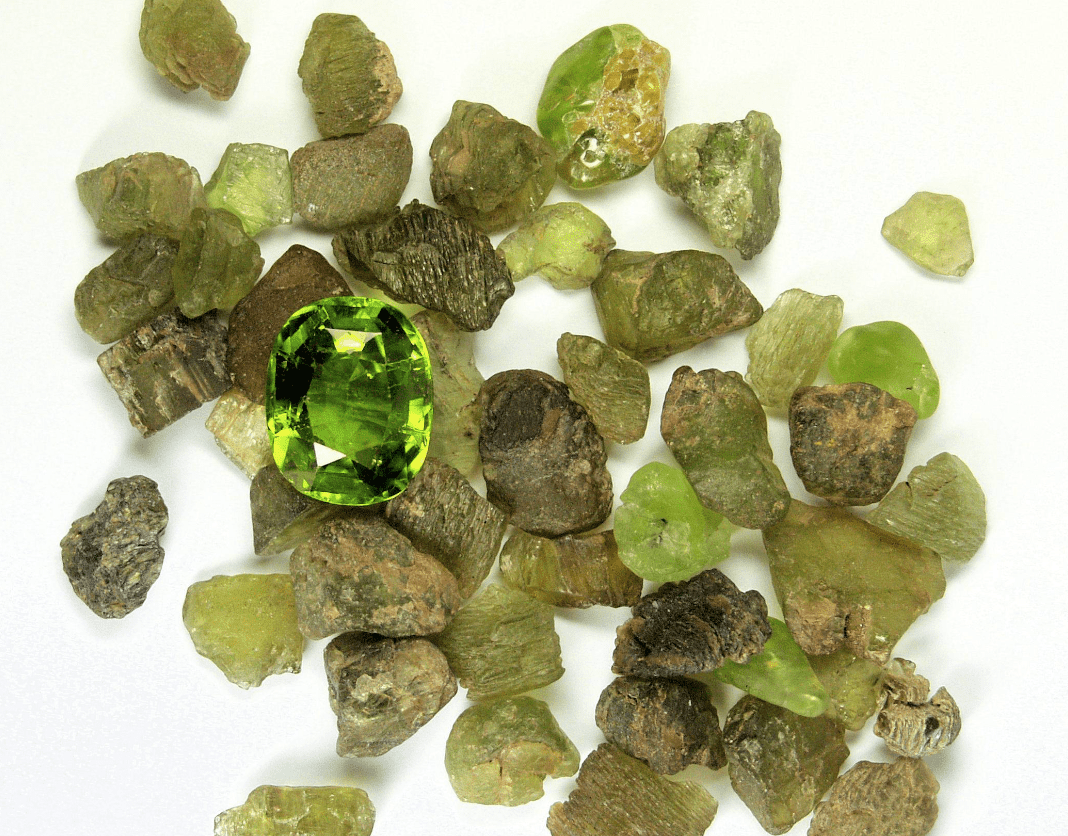 Peridot stones have a reputation in the crystal healing community as a stone associated with health and reduction. Many green gemstones have properties revolving around health. It is also said reduce feeling of guilt and stress.

We all could use a little more peridot in our lives, don't you think?

Peridot is easy to find around the world, but the biggest sources are Egypt, Myanmar (formerly Burma), Norway, Arizona (United States), and New Mexico (United States).

Emeralds are very complex precious gemstones. They are one of the 4 precious stones alongside sapphires, rubies, and diamonds. Emeralds are the medium to dark green variety of the mineral beryl. The beryl family is host to other favorite gemstones like aquamarine and morganite. 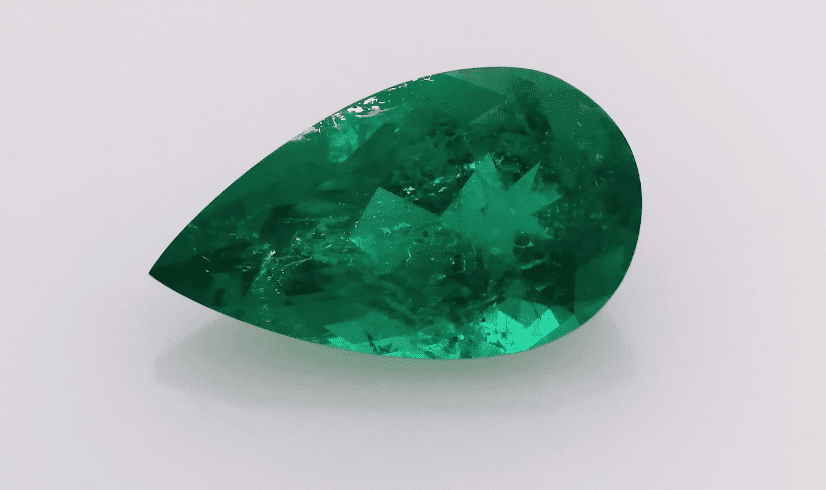 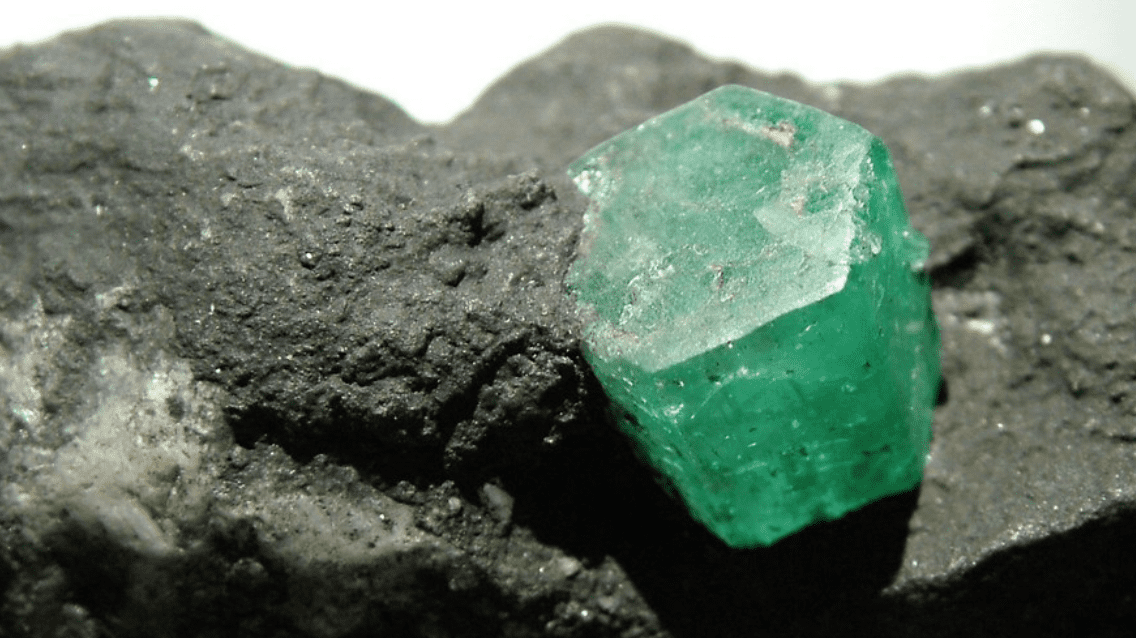 The gemstone revered since ancient times. The height of their popularity in old times was during Cleopatra's reign. The green gem was a favorite of hers. Instead of the faceted peridot stone we see today, the gem was formed as beads or cabochons for brooches.

An emerald gemstone is most often used in fine jewelry pieces, but it has metaphysical and astrological properties like any other gemstone. It also follow the theme of health as well as clairvoyance, awareness, and healing-for both emotions and physical ailments of the heart.

The most notable emerald stone deposits are Columbia, Zambia, and Brazil. Afghanistan and Egypt also have deposits, but they're not best quality.

Best quality peridots are yellow to a lime color green, but can be found in many shades of it. Peridot occurs in both dark and light green. The green color for this stone comes from the amount of iron in their chemical structure. 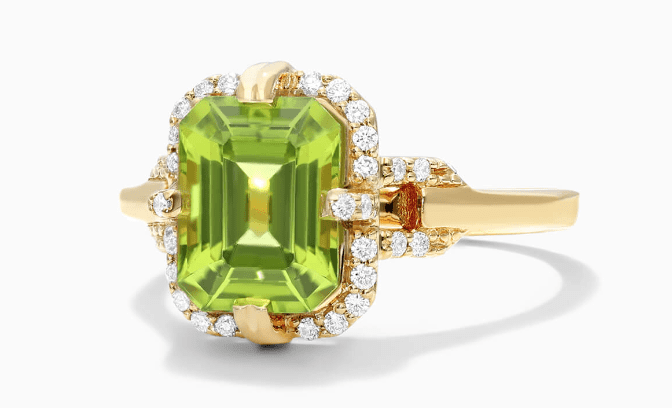 It's pretty easy to find peridot with excellent clarity. Transparent gems are common, so don't buy a peridot that is cloudy or highly included. That doesn't mean they don't have inclusions at all. Tiny bubble inclusions may be found in the crystal under magnification, but shouldn't impede its beauty.

Lab created peridot exists, but not so much in the fine jewelry world. It's not a rare stone or expensive, so it's easy to find natural peridot. Lab created gemstones are commonly sold on marketplaces like Amazon or Etsy. Any gemstone or green colored material can be marketed as a peridot simulant.

The most common ones are cubic zirconia and colored glass. It can also be mistaken for other green gems like:

Emerald and peridot may both be green gemstones, but their color doesn't happen the same way. Emeralds happen when chromium impurities enter a colorless beryl crystal. Unlike a peridot stone, an emerald can only be a medium to deep hue. Any lighter hues are referred to as green beryl and aren't near as valuable or desired. 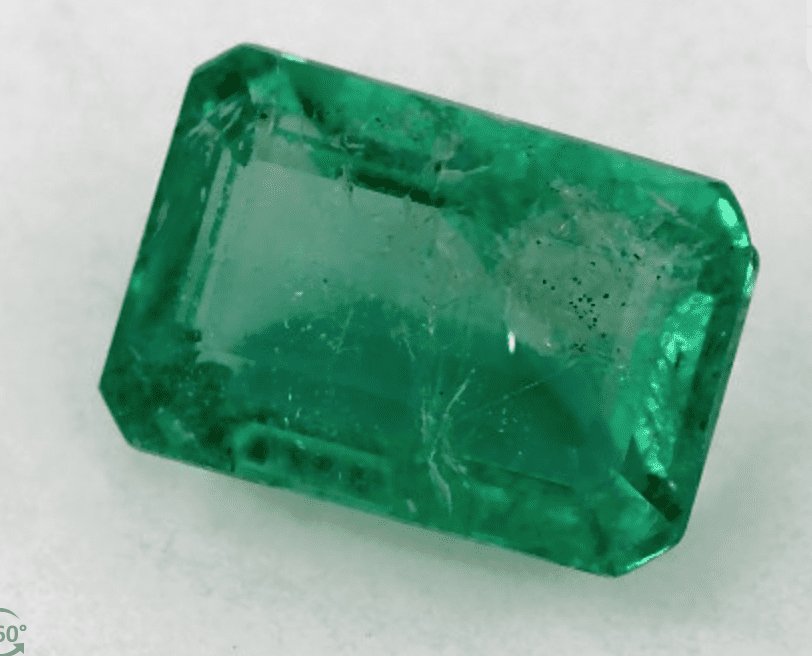 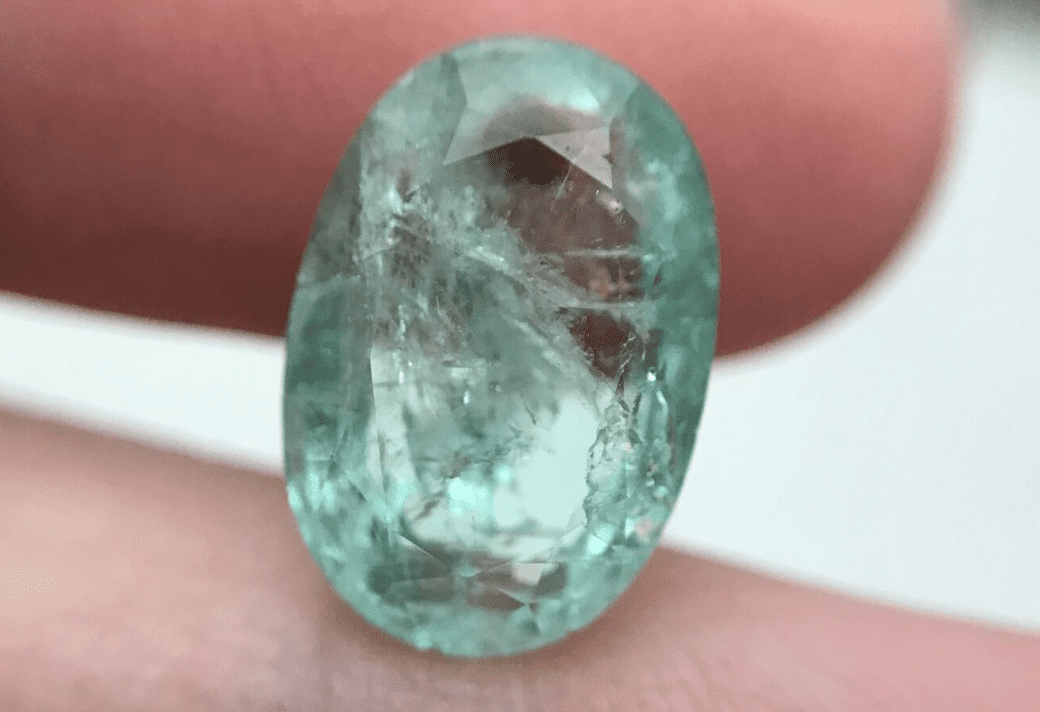 Majority of natural emeralds in the world are treated gemstones. Gem treatments are common for many gemstones to enhance color or clarity. Unlike natural emeralds, it's easy to find crystal clear synthetic emeralds.

They also have a perfectly saturated hue, without needing any gem treatments. Both emerald jewelry and peridot jewelry can be imitated by the same materials and minerals. Glass is the most common simulated emerald. 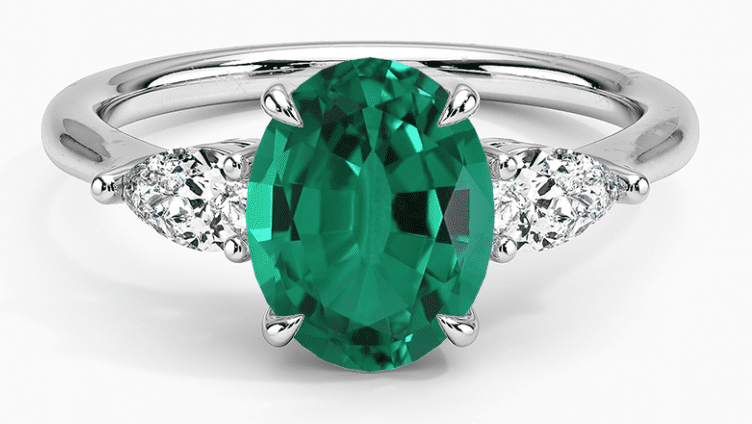 Peridot vs Emerald: Price and Value

The cost difference between emerald and peridot is significant. Best quality peridot stones go for around $25 per carat. Mined, untreated emeralds can cost up to 100,000 per carat. The price of an emerald stone depends on a variety of factors like its gem treatments as well as its origin.

Read also: What are the Top Diamond Alternatives?

Though emeralds are worn as diamond alternative engagement ring stones more often than peridot, they don't actually make great stones for daily wear. Emeralds may fracture when accidentally bumped against a hard surface, but not peridot.

Emeralds have a hardness level of 7.5-8 and peridot's is between 6.5-7 on the Mohs scale. Peridots may take a hit better, but their resistance to the daily scratching of dirt and dust particles is not as good. This jewelry stone should be cleaned well whenever worn.

Emerald and peridot may both be the same colors, but that's where the similarities end.

Peridot is much less common and not near as popular as emerald. Emeralds are a precious gemstone can can cost tens of thousands more per carat than a 1 carat peridot. Despite their cost difference, peridots are better for daily wear than emeralds and have better clarity.

Hopefully you have an idea of the differences between the May birthstone and the August birthstone. Both make beautiful jewelry for any occasion.