Wondering the difference between aquamarine and blue topaz?

In this Learning Guide, I'll answer the following questions about these popular blue gemstones 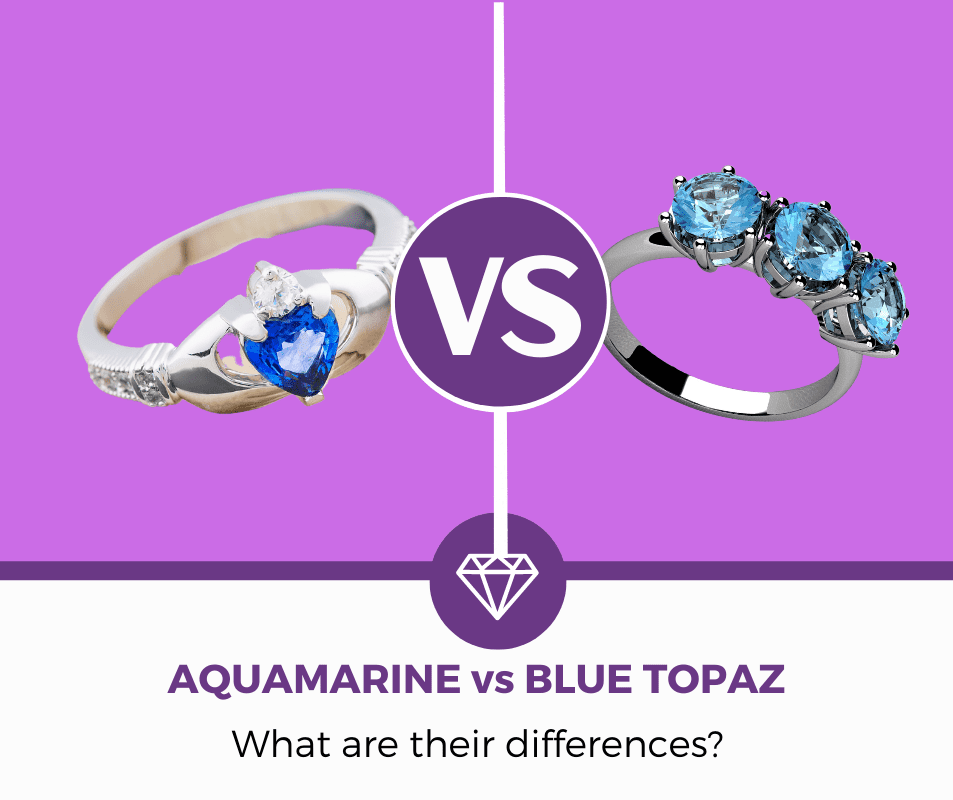 Aquamarine comes from the beryl family, whereas blue topaz is from the topaz family.

Aquamarine stones have higher durability, whereas topaz gemstones are more likely to split.

An aquamarine gemstone is the blue to bluish green variety of the beryl family. It's the same beryl family that's responsible for morganite and emerald stones. Additionally, aquamarine is the main birthstone for the month of March. It is a semi precious gemstone. 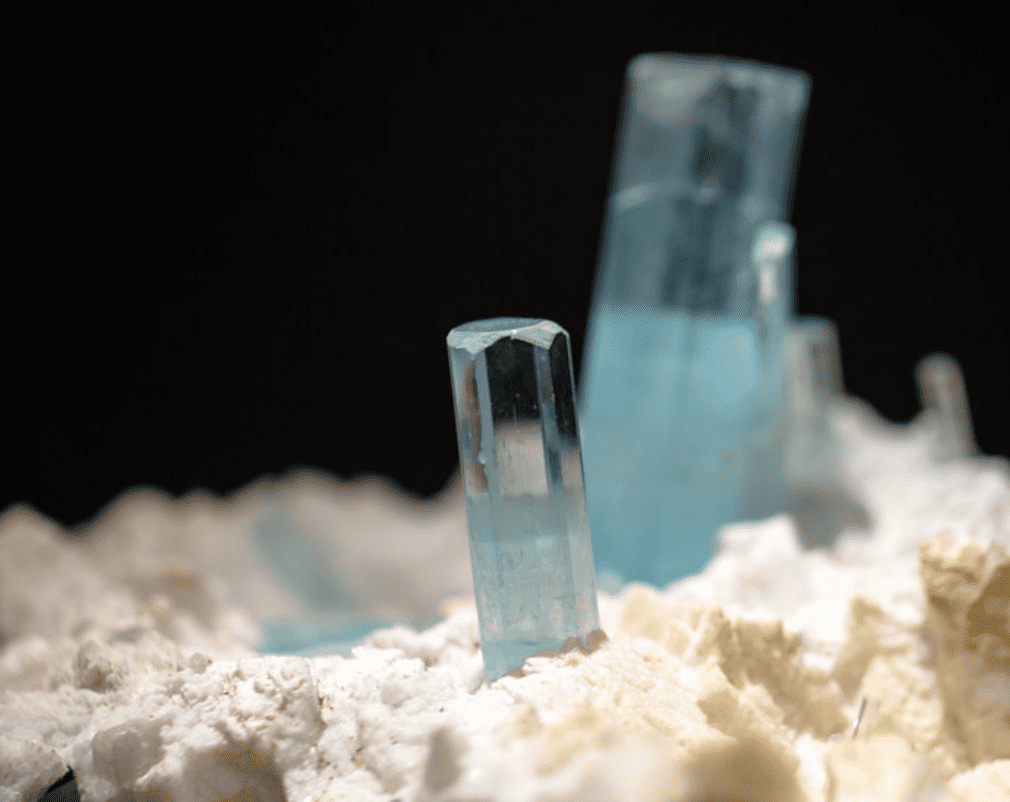 Aquamarine folklore has always been inspired by the sea. Ancient Romans called it "Water of the Sea". They also believed it had protection properties, as many crystal healers do today. Doctors used them for controlling bloating and issues of gluttony.

These blue gemstones were used by the Ancient Greeks, Egyptians, Hebrews, and Samaritans. Everybody loved aquamarines.

Aquamarine is an abundant mineral in the earth, however not all are top color. Most of it comes from Brazil, but can be found in Nigeria, Myanmar, Africa, Siberia, and India. There's more too. 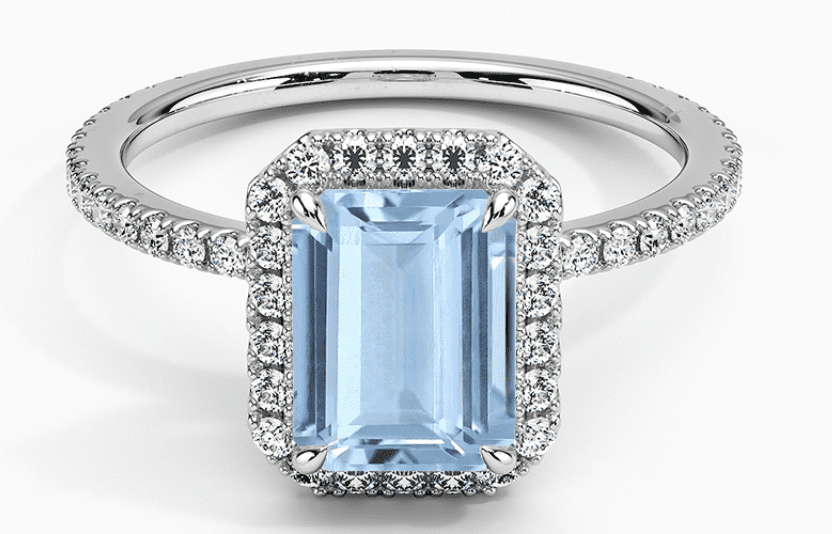 Topaz is a common gemstone in the jewelry industry. Most know colorless topaz as a diamond alternative. It forms in a variety of colors, one of the most popular being blue topaz. Topaz is a silicate mineral composed of fluorine and aluminum.

Blue topaz is the December birthstone. The name topaz is derived from the word "Topazios". It was the Greek title for an island in the Red Sea. It also has been said it is the Sanskrit word for "fire".

However, the ancient Greeks believed a topaz would bring them strength. However, mainly yellow and brown topaz were around. Topaz deposits weren't found until around 1960, by Max Ostro in Brazil.

Naturally occurring blue topaz is extremely rare. Fortunately, heat treatment and irradiation techniques have allowed them to be very common and inexpensive. By applying the treatment to colorless topaz, scientists can produce blue topaz easily. The treatment is also permanent.

Most gem-quality aquamarine jewelry at stores like Kay and Zales are generally pale. That's because these are the undesirable stones of aquamarines. Most aquamarines are very affordable. If you find dark aquamarine stones, you should expect to pay a decent price for it. But more on that later.

Stones below 5 carats are most often a pale blue color, unless they've been treated. Light blue stones are common, but some tones shouldn't be called aquamarine at all. White aquamarine is actually colorless beryl, also called goshenite.

Treated stones and untreated stones have the same quality, but it lessens the value and price. Heat treatment is a common practice for aquamarine gemstones. It's normally done in its rough form, before it has left the deposit. 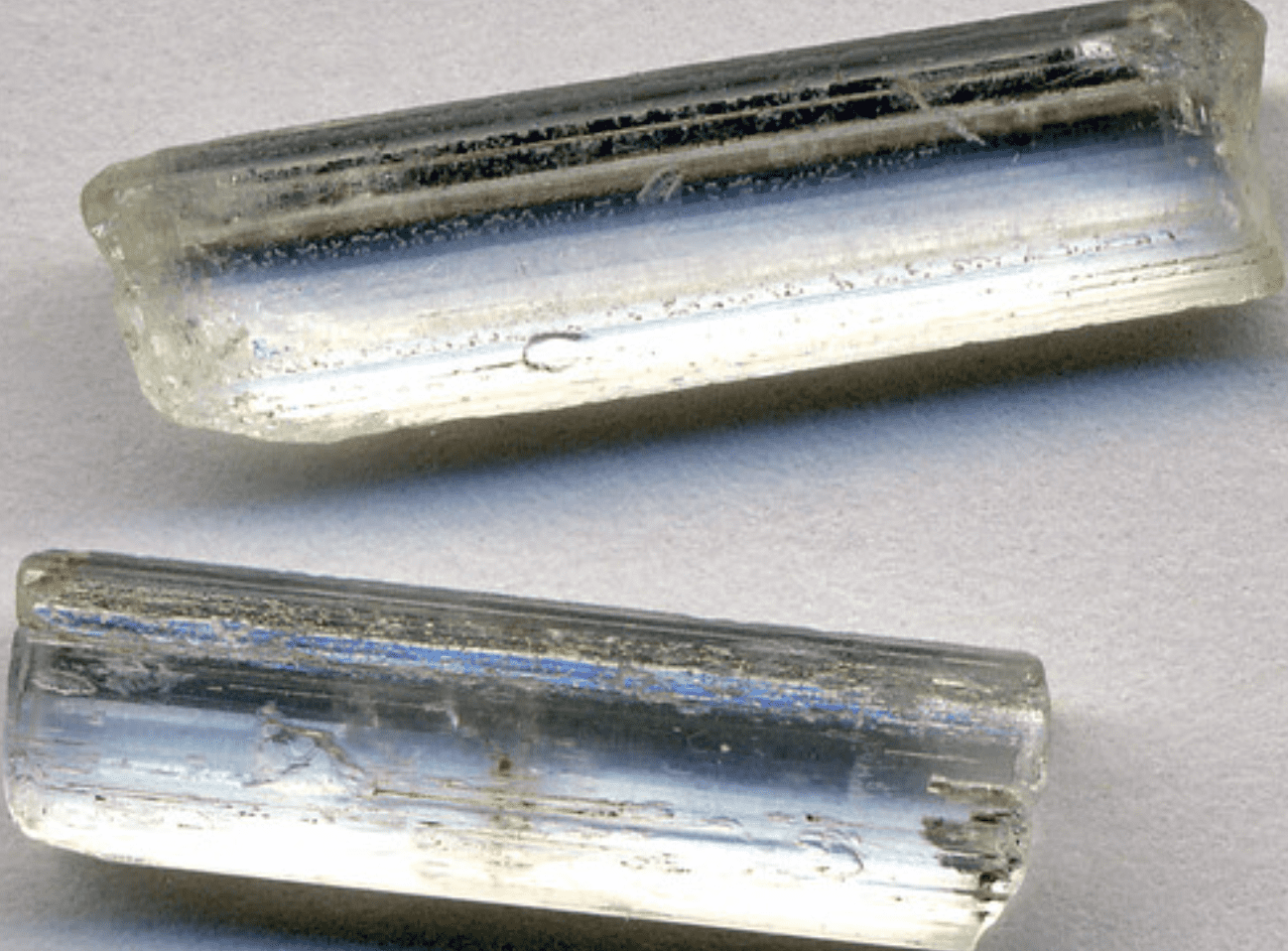 A heat treated aquamarine gemstone changes the hue, not the tone. Often time the price depends on the hue of the gem, but not with aqua. The strength of the blue tone is the most important aspect of aquamarine gems.

Strong tones with a blue to blue green color aquamarine stone are the most valuable. However, the dark tones only occur in crystals over 5 carats. You're less likely to see someone with an aquamarine ring like that.

Though an aquamarine gemstone is affordable most of the time, they are still lab-created ones out there. Lab-created stones have the same chemical, physical, and optical properties as natural aquamarine. It's very difficult to tell them apart with the naked eye. You shouldn't purchase pre untreated aquamarine stones without seeing a gem certificate first.

Natural aquamarine may have a few clarity imperfections, though most crystals are pretty clear. Synthetic aquamarine jewelry won't have any inclusions. The best way is to send it to a lab or ask a gemologist. 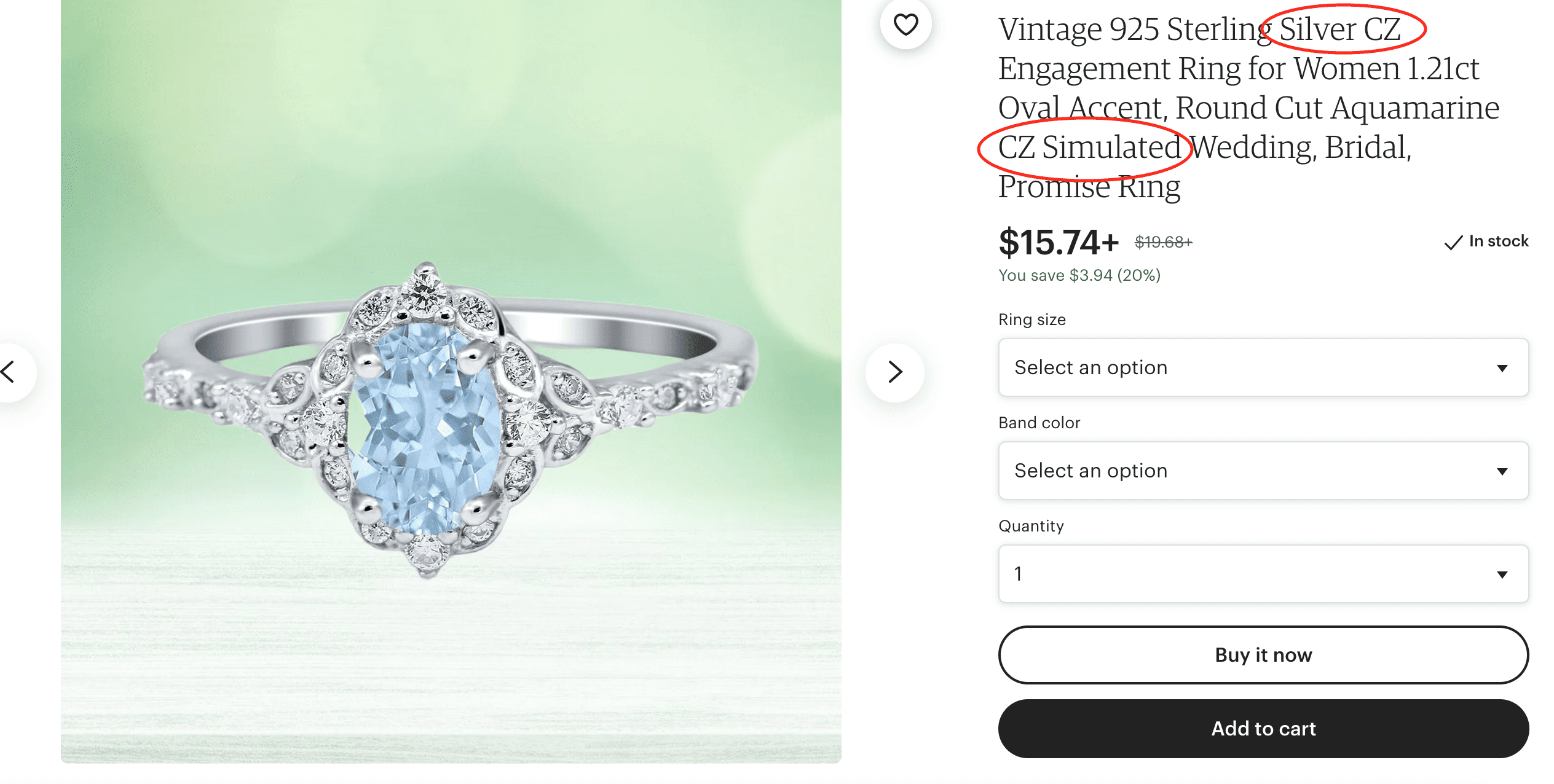 Any blue stone with the right tone can be imitation aquamarine. In a children's jewelry collection, you'll often see light blue cubic zirconia or zircon as an imitation stone. Many people get them confused with blue topaz, whose also capable of similar hues.

A diamond tester can usually distinguish an aquamarine and blue topaz. Most testers have moissanite, topaz, and diamond readings. 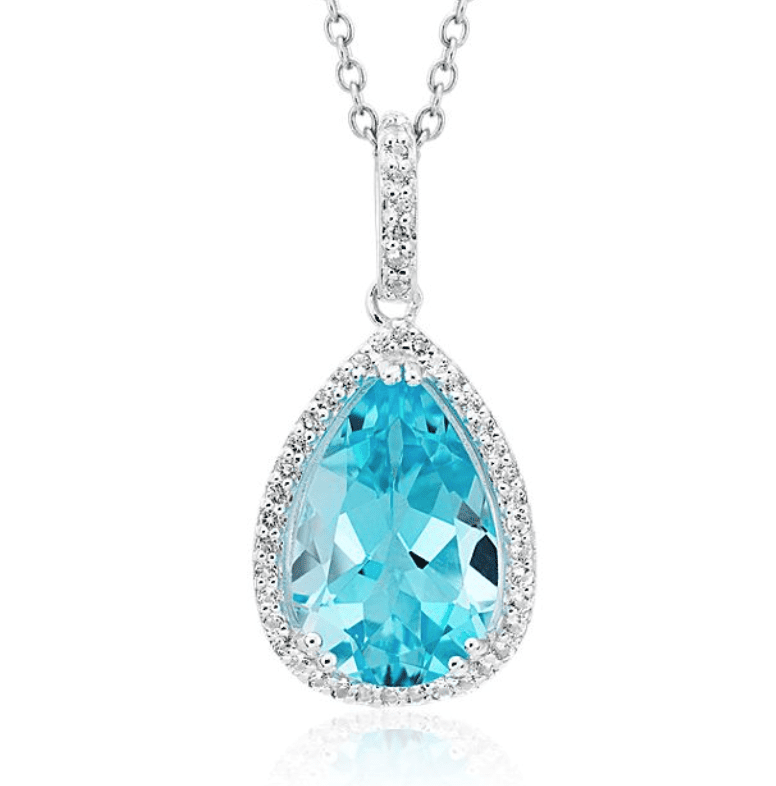 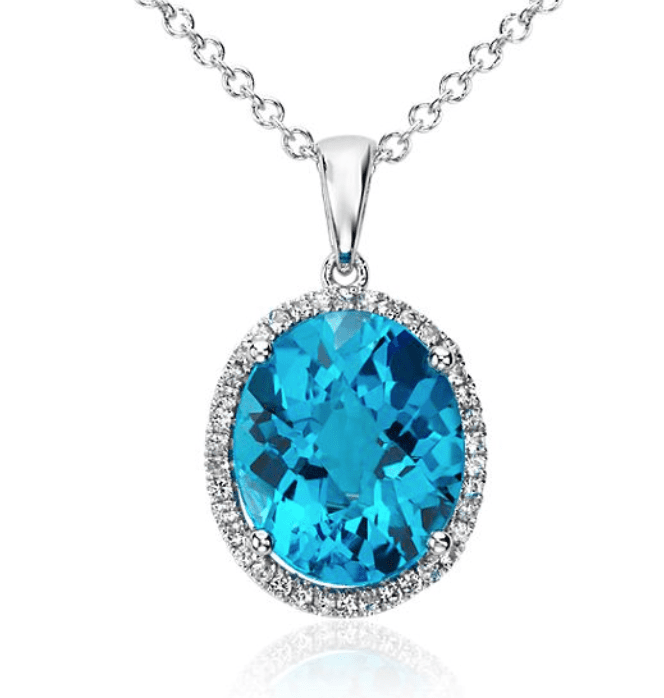 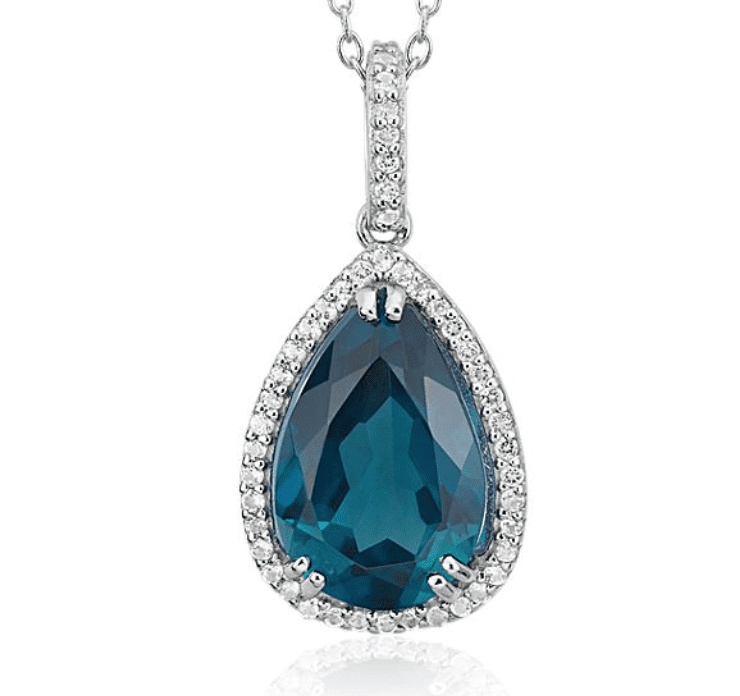 Sky blue topaz and swiss blue topaz are the hardest to tell apart. A sky blue gemstone is a muted blue color, while swiss blue is more of bright blue. You might find sky blue to have more of a green tint. 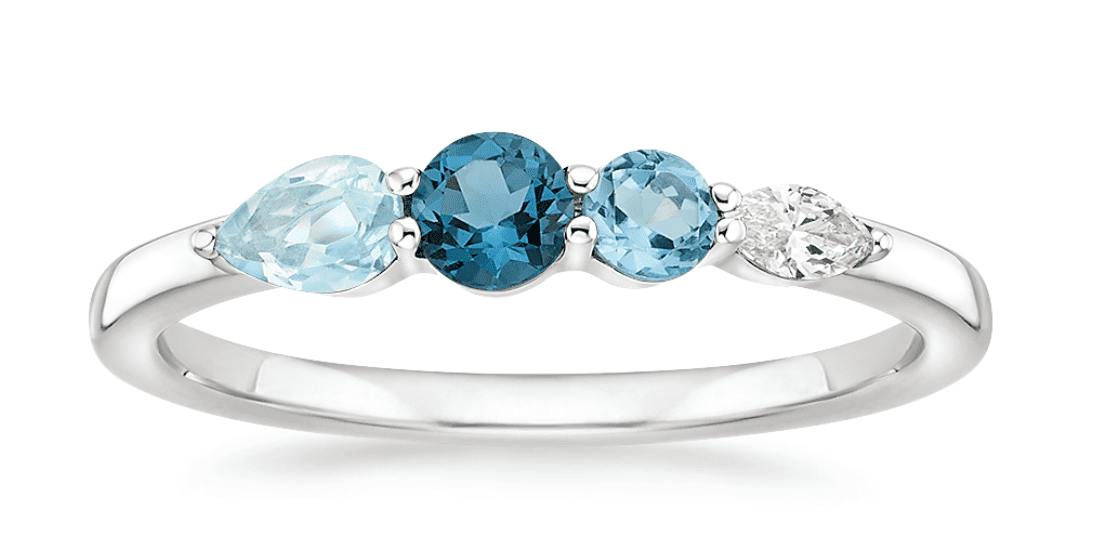 As for gem imitations, many compare blue topaz to aquamarine. They can imitate each other, alongside other gems like cubic zirconia or blue zircon. You shouldn't worry much about being ripped off for blue topaz, unless someone's asking outrageous prices for it.

Read also: What are Simulated Diamonds?

Both aquamarine and blue topaz are affordable in their natural form. Common heat treated or enhanced material brings the cost down, while still retaining the natural origin. However, you're more likely to run into untreated aquamarine rather than naturally occurring blue topaz.

Like most beryl, aquamarine occurs in big crystals. The commonality of it allows people to obtain these blue gems in a larger carat weight. If you recall, larger aquamarines are more likely to have darker tones to increase value. 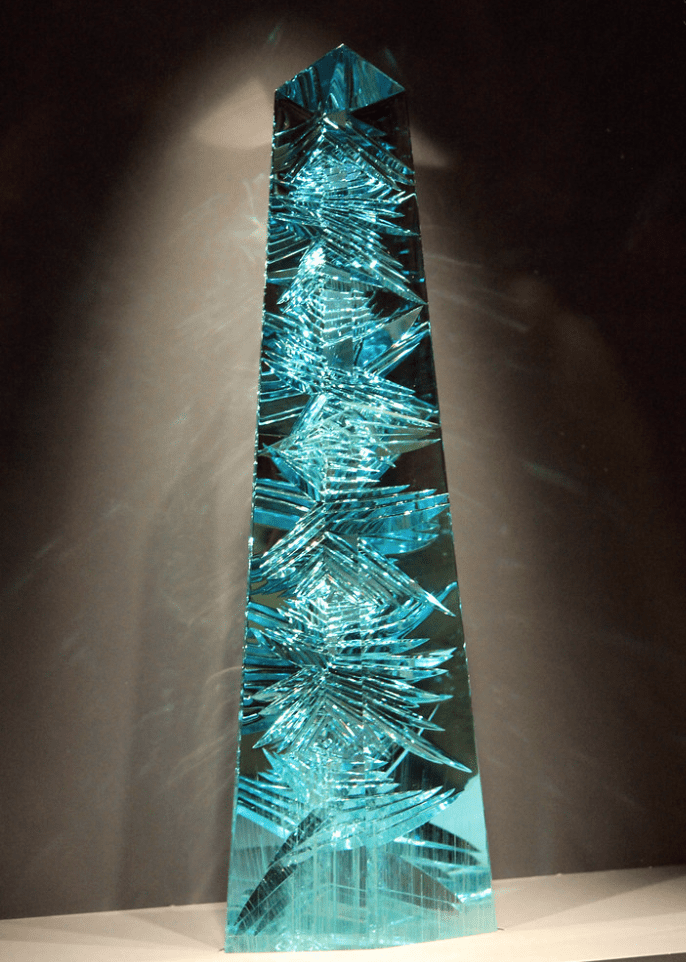 But even large light blue aquamarines are affordable. It might even surprise you to know that gems over 5 carats decrease in value because they're not really worn for jewelry.

Blue topaz doesn't reach these prices. Since natural blue topaz is hard to come by, it's safe to assume that most blue topaz stones you come across will be heat treated white topaz or lab created.

One of the ways we try to determine value of a stone is by its overall durability. You want to make sure you're choosing a stone that's going to hold up well enough for an engagement ring. Most plan to wear them everyday, so you don't want to be paying too much for a stone you'll damage or need to replace.

The mineral scale of hardness is one of the ways we measure the value. It lets you know how resistant your stone is to everyday dirt and dust. An aquamarine ranks an 7.5-8 on the Mohs scale. A blue topaz ranks an 8. These two gemstones have good scratch resistance. A diamond ranks a 10, which is the hardest mineral.

However, hardness only represents scratchability. Durability of a stone comes from its cleavage and fracture. Topaz has perfect cleavage in one direction. That means if a blue topaz is struck in the wrong place, it's more likely to split along one way. But don't worry, that's not a guarantee it will happen, even if it is hit. Your chances are raised.

Aquamarines have indistinct cleavage, so there's no extra risk of it breaking in a specific direction. It doesn't mean it can't ever chip or break. It's less likely.

Overall, gemologists consider blue topaz to have good wearability and aquamarine to have excellent wearability.

Both of these blue gemstones are great stones to wear in jewelry. Aquamarine is a better gemstone to wear for engagement ring or wedding jewelry you plan to wear every day.

Despite that, a blue topaz ring can be worn easily without any damage being done to it. Thankfully, even if your gemstones do get damaged over time, they aren't highly expensive to replace. 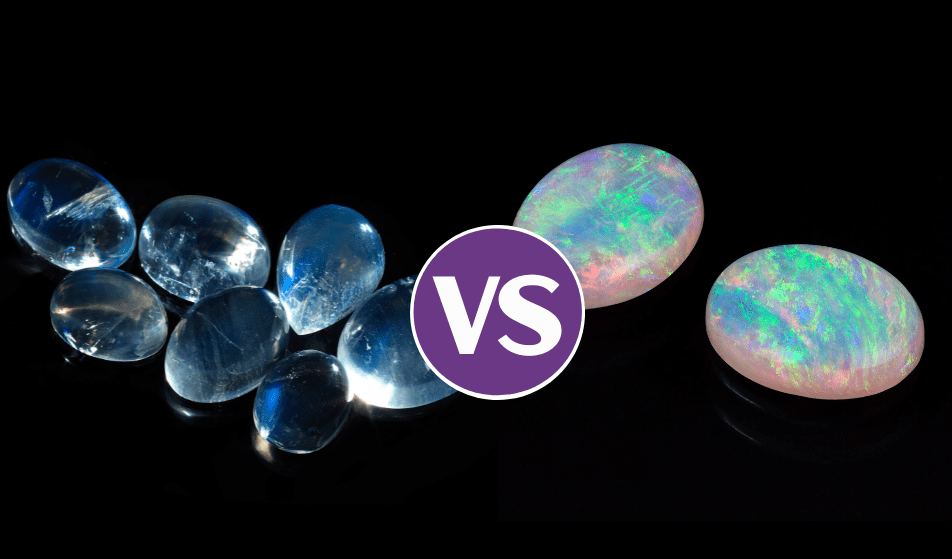 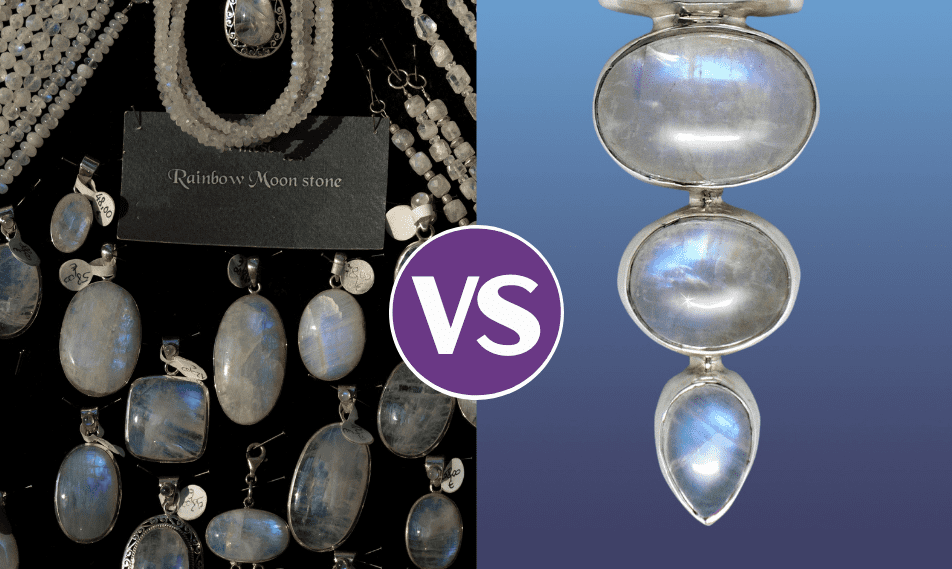 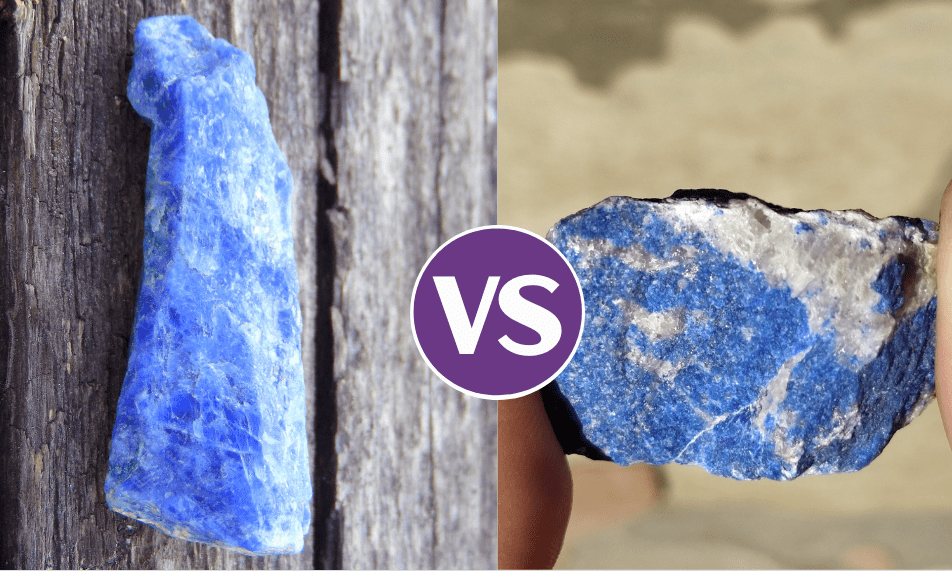 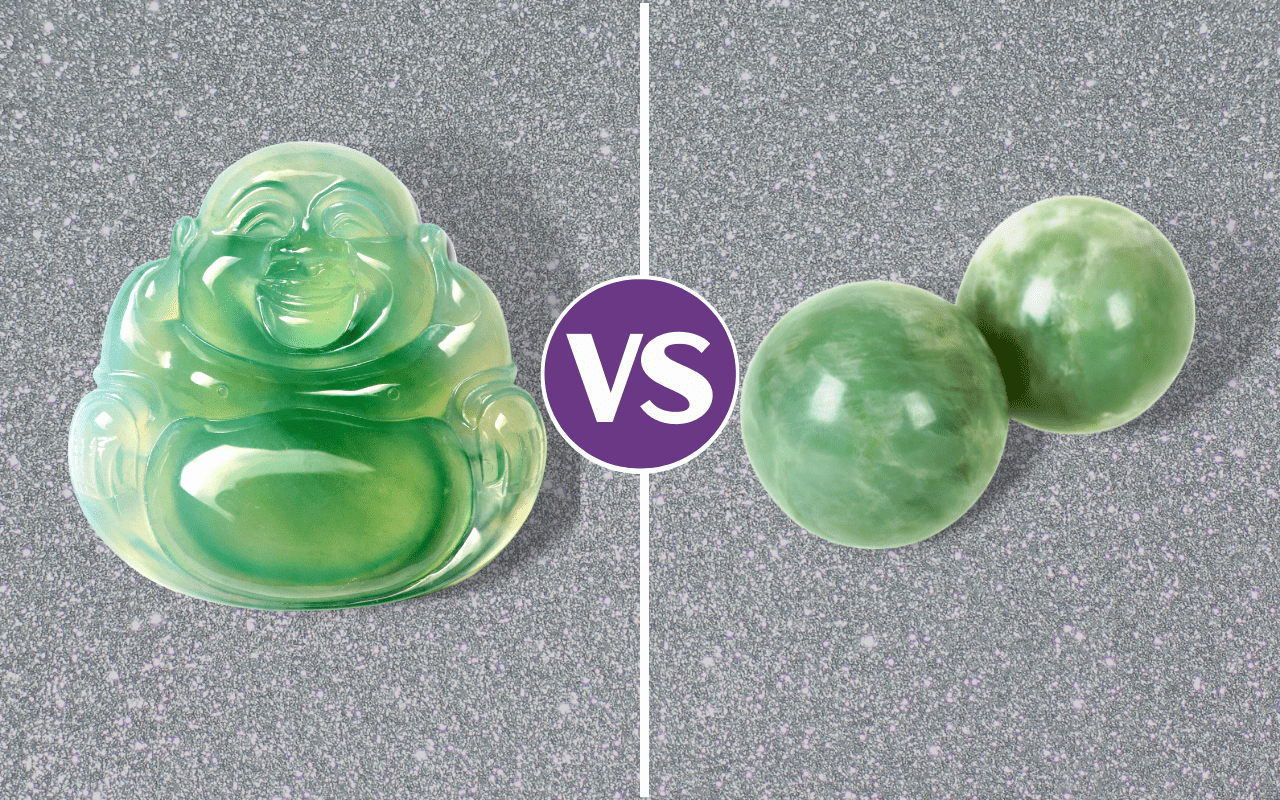 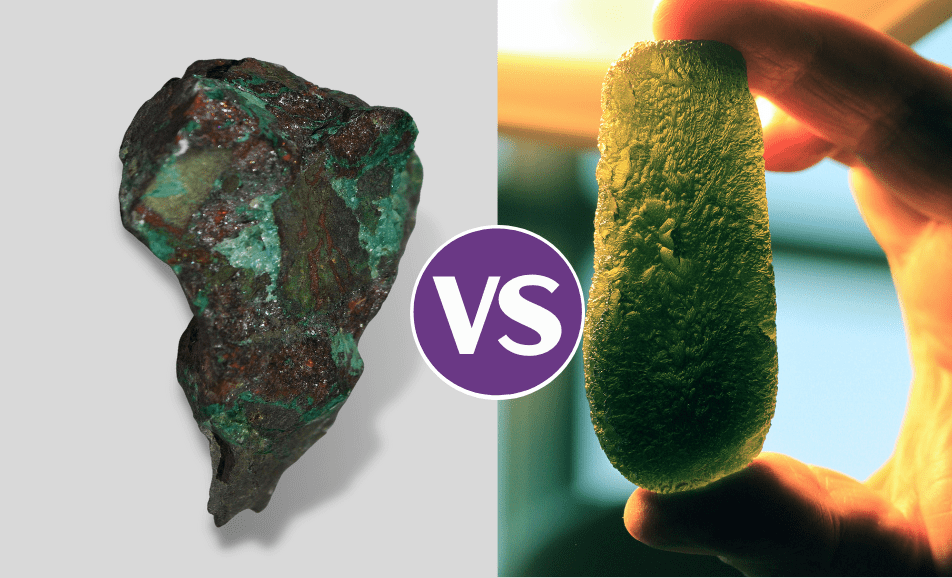 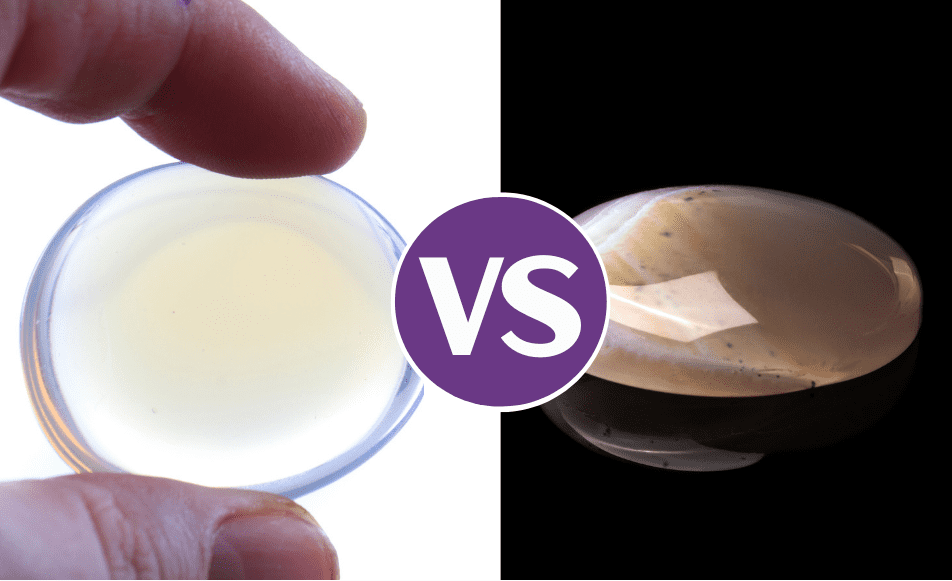